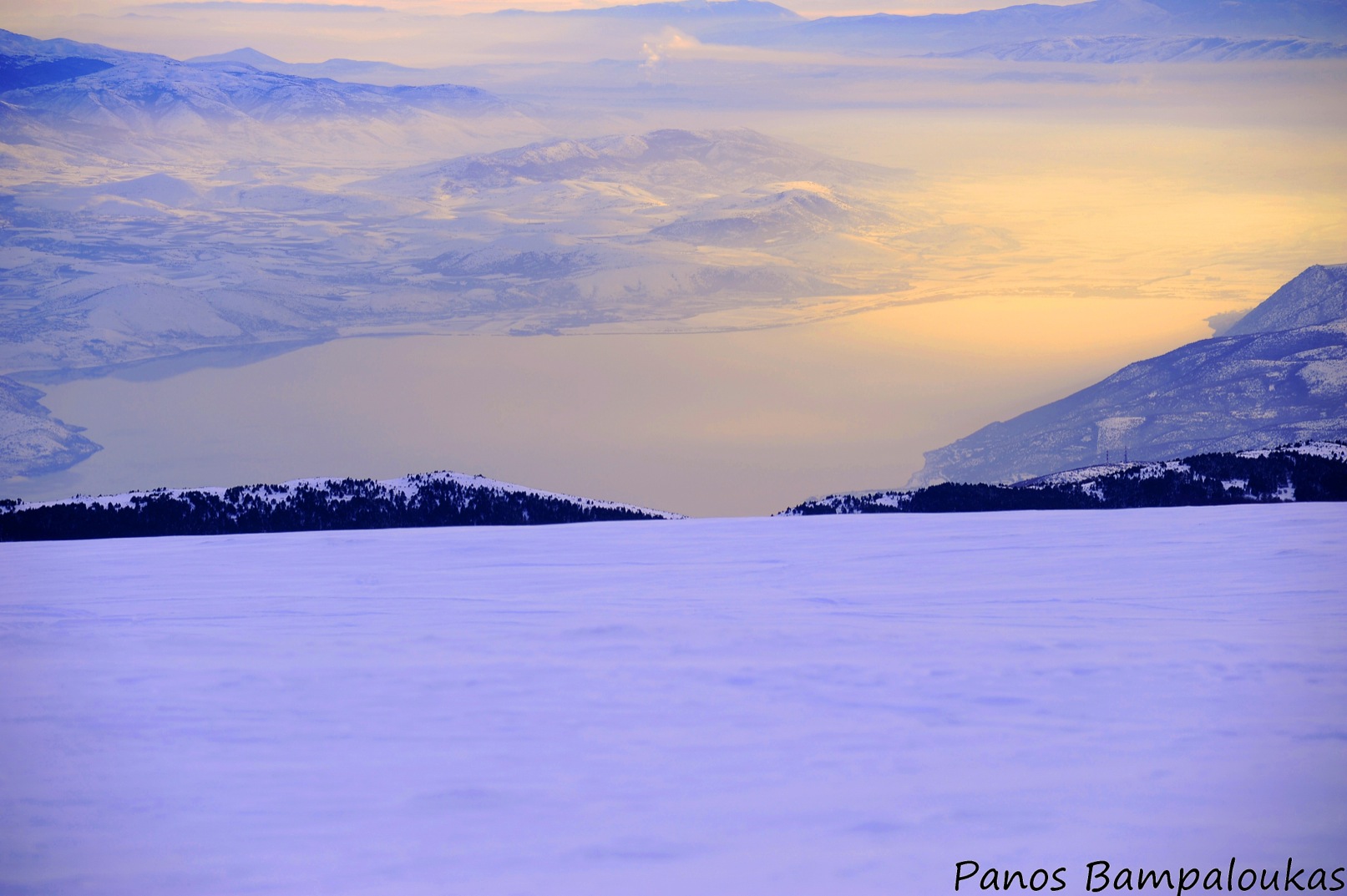 With its highest peak reaching 2.524 m. in altitude, Mount Kaimaktsalan (White Peak) or Vorras is the third highest in Greece after Olympus and Smolikas. A significant percentage of the mountain’s mass is within the greek borders, while the northern part, behind the summit of Prophitis Iias, belongs to the Republic of Macedonia. The highest peaks- exceeding 2.000 meters in altitude- are located on the right of Prophitis Ilias and to the East. 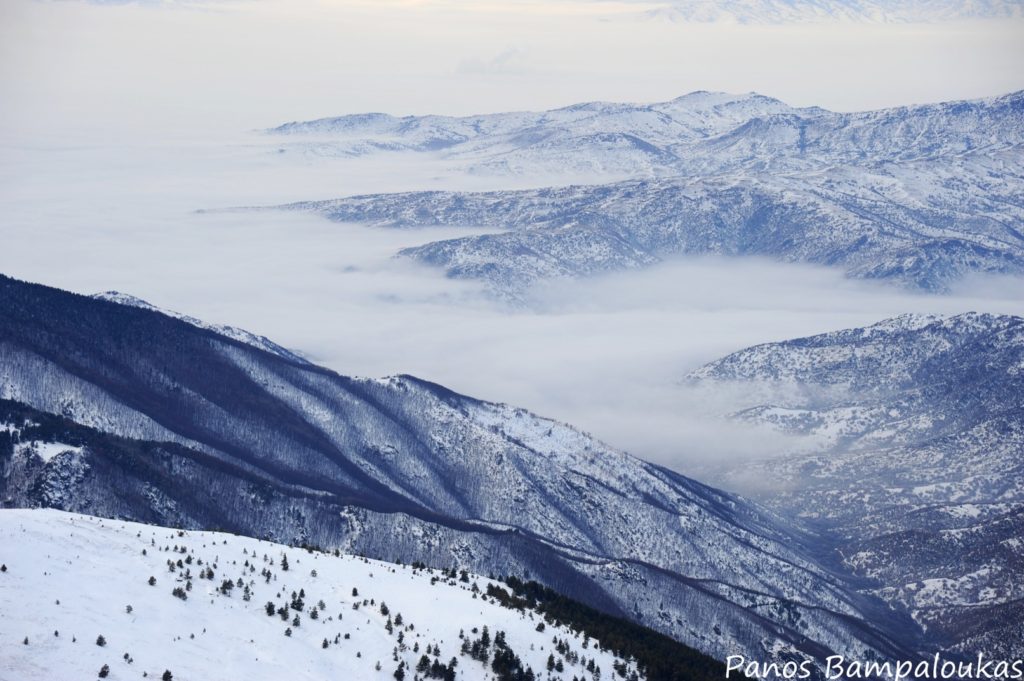 It is widely known for its snow resort, the multiple rivers and streams springing from its slopes, as well as the dense forests of pines, firs and beechwoods, which have become a haven for the country’s threatened wildlife. Mavro Dasos (Black Forest), above Panagitsa village, is made of an extremely rare pine species and therefore under special protection.

Apart from the popular ski center, hundreds of visitors spend their holidays close the thermal springs of Pozar, just outside Loutraki village. The area around Nikolaou gorge, which ends near the springs,  is possibly the most remote part of the mountain, since the absence of forest roads and the frequency of landslides turn hiking into a real adventure. Still, the gorge itself is flooded by hikers of all ages on weekends and holidays. 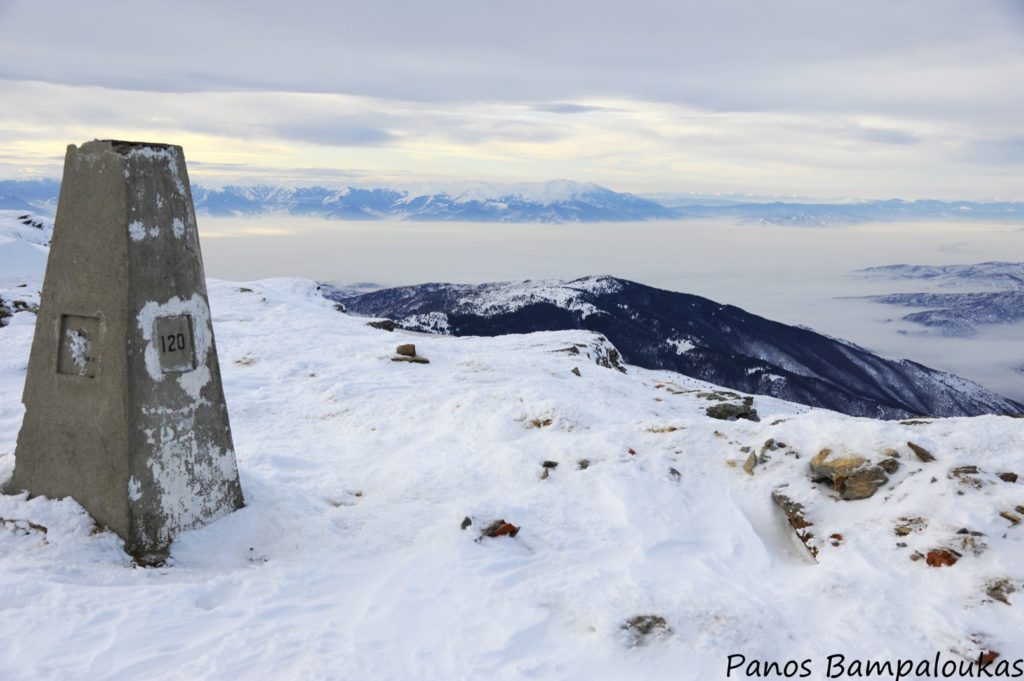 Even though they have spoiled the scenery, the numerous forest roads crossing the rest of the mountain- opened as a result of extensive woodcutting- are great for mountain biking. Footpaths on the eastern side are slowly beginning to disappear. Stone guardposts, built by guerilla fighters during the German occupation and the Civil War that followed, can still be seen at spots where the forest is particularly dense, as well as on mountain ridges.

The local natural environment is truly unique, since it is home to rare species such as wild boars, king eagles, vulture eagles and- most probably- bears. Sadly, however, the mountain is situated at close proximity with cities like Edessa and Florina, the citizens of which have a long tradition in hunting.Thanks to the great number of roads hunters have access even into the heart of the forest, where they pose a serious threat for wildlife.

Yet the greatest danger for the mountain’s fragile ecosystem comes under the guise of “progress”: Although under special protection as part of the Natura network, Kaimaktsalan is among the pieces of land which- if the government’s plans succeed-, are meant to be offered to investors, with the current financial situation serving as a convenient alibi. 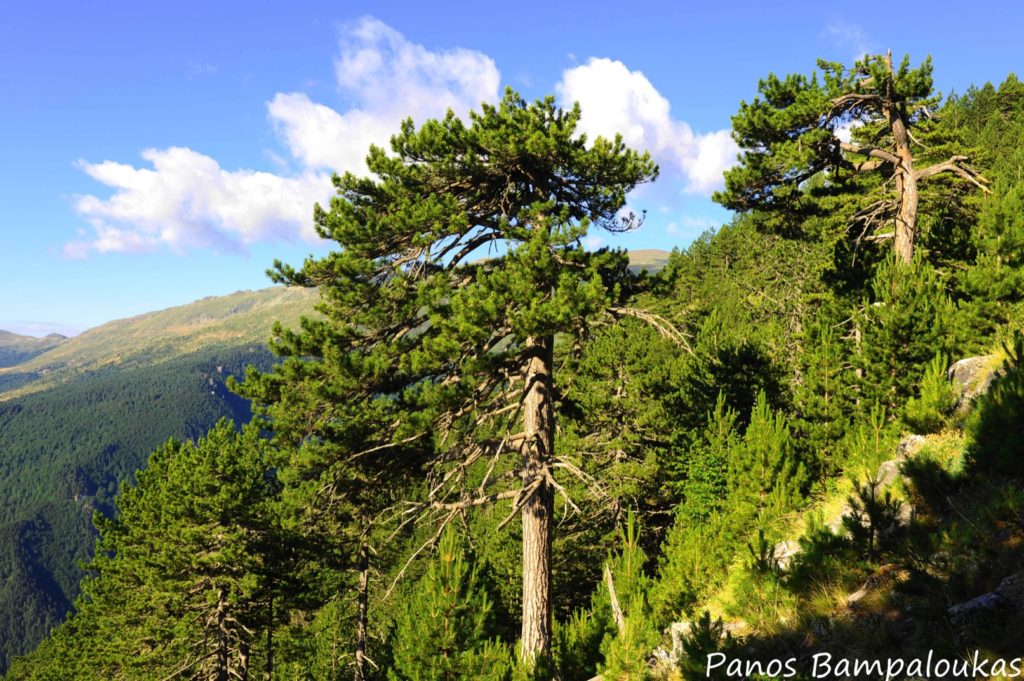 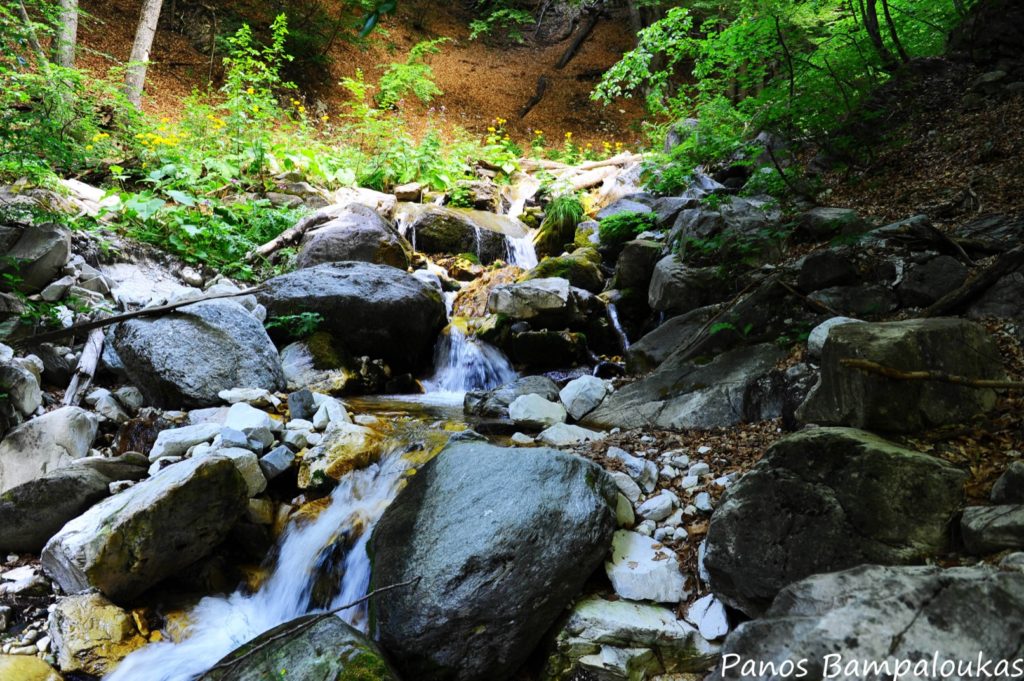 Recommended routes
Aridaia thermal springs- Nikolaou (Ramno Bor) Gorge- Solouna springs- Dokari- Aridaia thermal springs: Follow the stone path beginning from the right side of the river, next to the cafe and swiming pool. You will soon reach a fork in the trail; you should take the branch, descending towards the river. The wooden bridges, which used to cross the rivers at focal points, have now collapsed, so you will have to walk through the water; it is therefore advisable to carry suitable shoes with you. Follow the river’s flow, crossing from bank to bank when necessary. As long as you stay close to the river, you are on the right course, even when no signs are in sight.

In about 1,5 to 2 hours you should reach the waterfall, hidden in the smaller gorge that meets the main one on the right side of the river. To find it, keep an eye for the signs on your right side and follow the stream, which merges with the river. It is possible to swim in the small lake, even though the waters are normally ice-cold. Upon resuming your hike, you should return to the river and continue walking parallel to it. The route gradually becomes more difficult, since consecutive landslides have created dangerous passages, while most signs have either been hidden under rocks and mud or swept away by the water’s flow. You will soon come to a point were the gorge splits in two; you should head left, into Ramno Bor.

Soon you will approach a massive landslide- possibly one of the most demanding and dangerous part of the route. Leave the river behind you and cross the scree slope from the right, moving carefully but swiftly, since the danger of new landslides is ever-present. Stay on the scree slope for a while, before descending to the river through thick vegetation. After the last difficult passages, follow the river until you reach a dried up riverbed, filled with big stones. Turn left, moving away from the river, and look for the red arrow marking the opening of the trail. The single sign is hidden in the trees and may be difficult to spot, but you are strongly advised to find it before continuing. 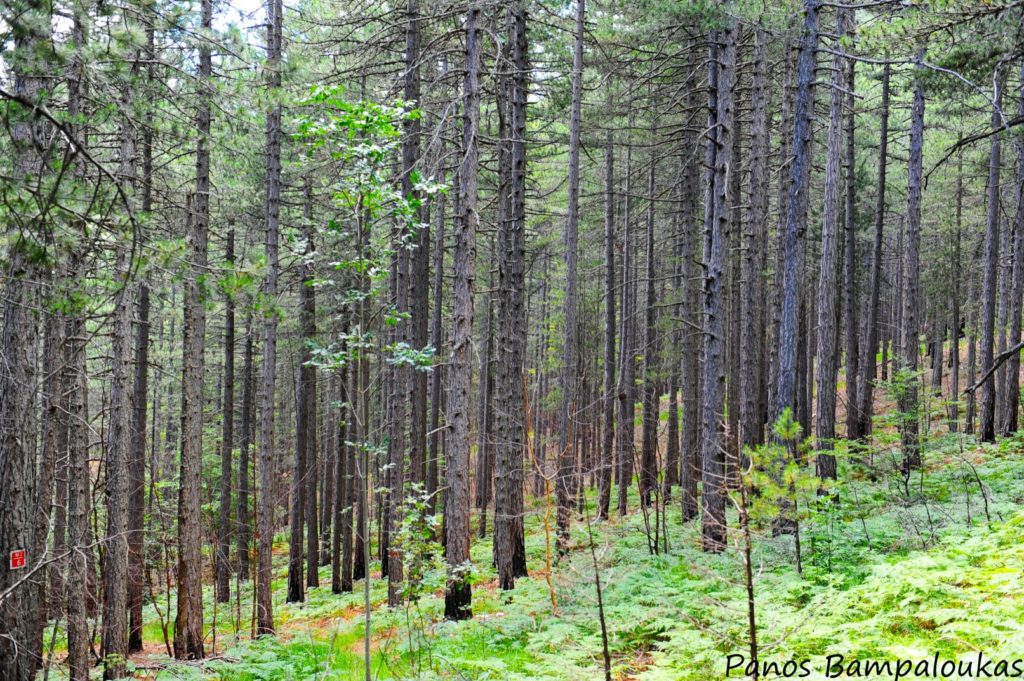 The path winds through the trees and away from the gorge. When you reach the sheep pen, head left and begin to ascend, taking care so as not to lose the red sings from sight- distracted as you might be by the beauty of the forest. After a tiring ascent, you should find a sign pointing the route to the ski resort and Solouna spring. The spring is only a ten- minute walk away on your right side; it might be wise to fill your skins, since from now on you will only have access to water coming from streams.

Afterwards, continue to the left, crossing a beech forest. As the path descends, it becomes narrower, before coming to another landslide- again, you should pass it as quickly and carefully as possible. Keep walking until you come to a small stream, then ascend towards the forest road. Try to stay on the main road, ignoring the smaller ones- probably the results of extensive woodcutting-, until you come to a resting point known as Dokari. Both the old sign and the wooden table are beginning to rot. If you wish, you may camp here, or you may choose a spot closer to the alpine zone- here, you will be more exposed to bad weather, but the panoramic makes up for it.

The path, which will bring you down to the village, is parallel to the mountain’s ridge. Its first section is marked with a Μ2 7 sign, which then becomes Μ2 14. Do not stray away from the signs for any reason- if you get lost, it will be very difficult to find your way again. At some point, the path turns left, heading towards a slope with low trees and scarce vegetation. Cross to the other side and descend until the trail splits into two. The right branch leads to a forest road, and then to an asphalt road ending at Loutraki village. The left one will take you back to Nikolaou gorge, very close to the thermal springs of Aridaia. Take special care, since the sings have faded and parts of the path have been overgrown by plants.

This route is unsuitable for beginner’s due to the trail’s obscurity and the very real danger of landslides. Should anything go wrong, help will not arrive until several hours later. After heavy snowfall, the steep passages and cliffs on the way towards Dokari may pose a challenge. In other words, you only attempt this cyclical route if you are an experienced mountaineer, armed with loads of patience and preferably with good company. 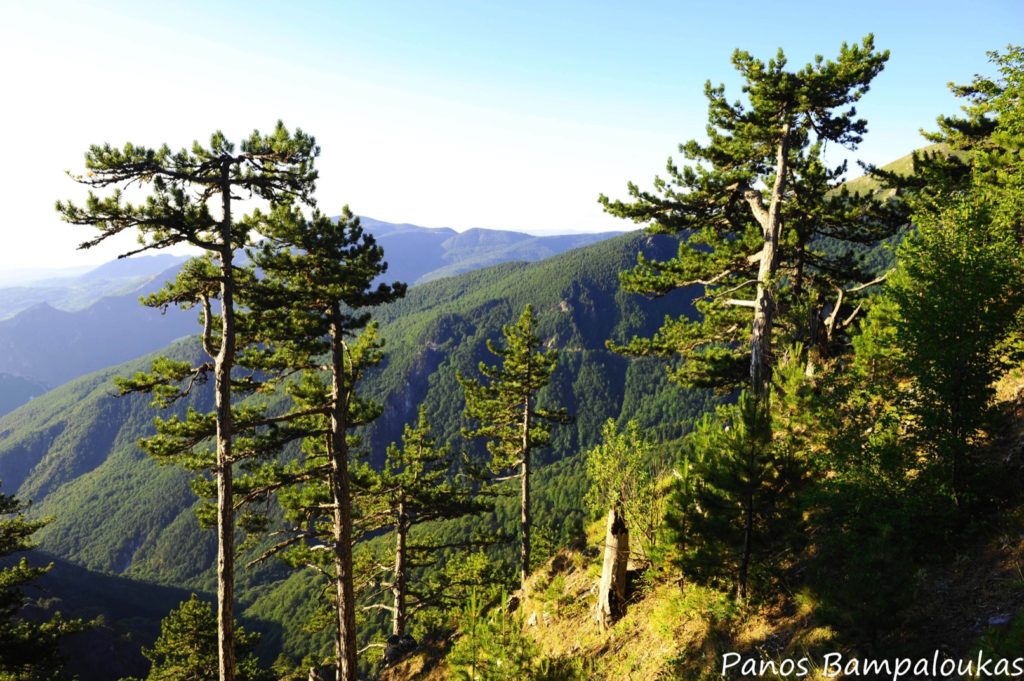 Local history
According to a legend, the wood used to make the spears, which were held by Alexander’s Macedonian soldiers, came from Mavro Dasos (Black Forest). Kaimaktsalan was repeatedly turned into a battlefield during the Balkan Wars, World War I and the greek Civil War.

Nearby sights
The thermal springs of Pozar are one of the most popular destinations in the area, drawing mostly older visitors. At Loutropoli you may also visit the local museum, which holds a collection of archaeological, natural and cultural exhibits.

The town of Edessa, with its ancient acropolis, the important roman and byzantine remains, the traditional neighborhood of Varosi and the spectacular Edessa waterfalls, is located about 35 km away from Kaimaktsalan and constitutes a must-see for history-lovers. You may also visit the ancient palaces and unique burial monuments at Pella, capital of the legendary Macedonian kingdom since the end of the 5th century A.D.

Ski resorts
A ski center operates near Meterizi. Kaimaktsalan is renown for the quality of its snow but also for its unpredictable clmate. During the winter, the slopes often disappear in fog and the pistes become inaccessible. It is therefore advisable to check the weather forecast before you travel.

Useful information
When on greek land, and especially in the North, it is advisable not to use the term Macedonia to refer to the neighbouring country. The only “Macedonia” recognized within the greek borders is the part of northern Greece, and presumably traces its name from the ancient Macedonian kingdom. Officially, the greek state disputes the neighbor’s right to use the name, since it interprets such claims as threats to its territory. “Skopje” is the name used by most Greeks, although FYROM might also be acceptable, depending on who you are conversing with.) 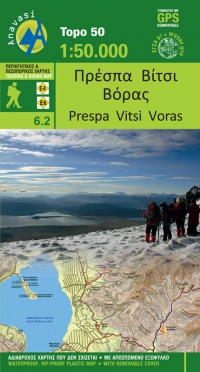 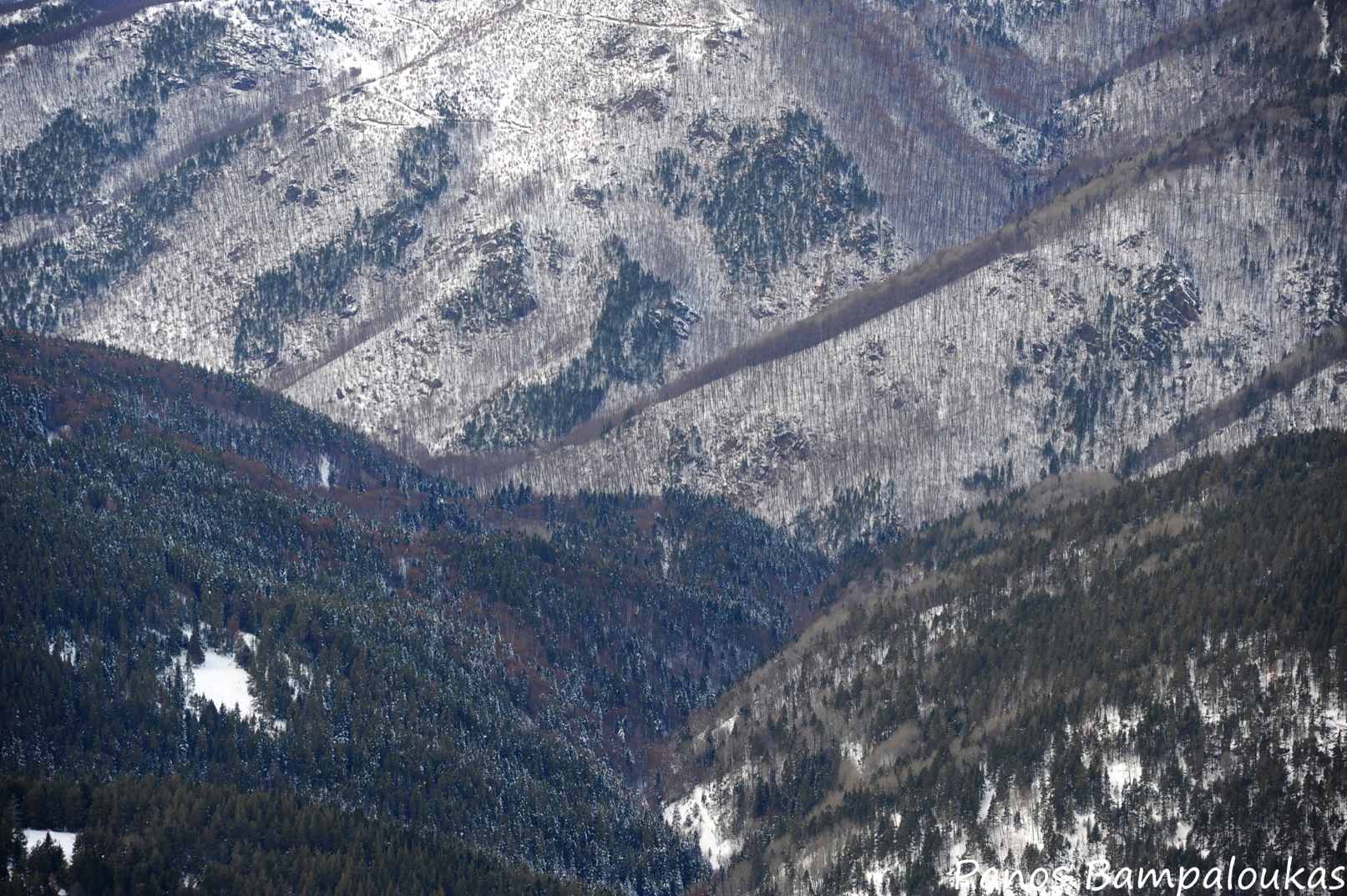 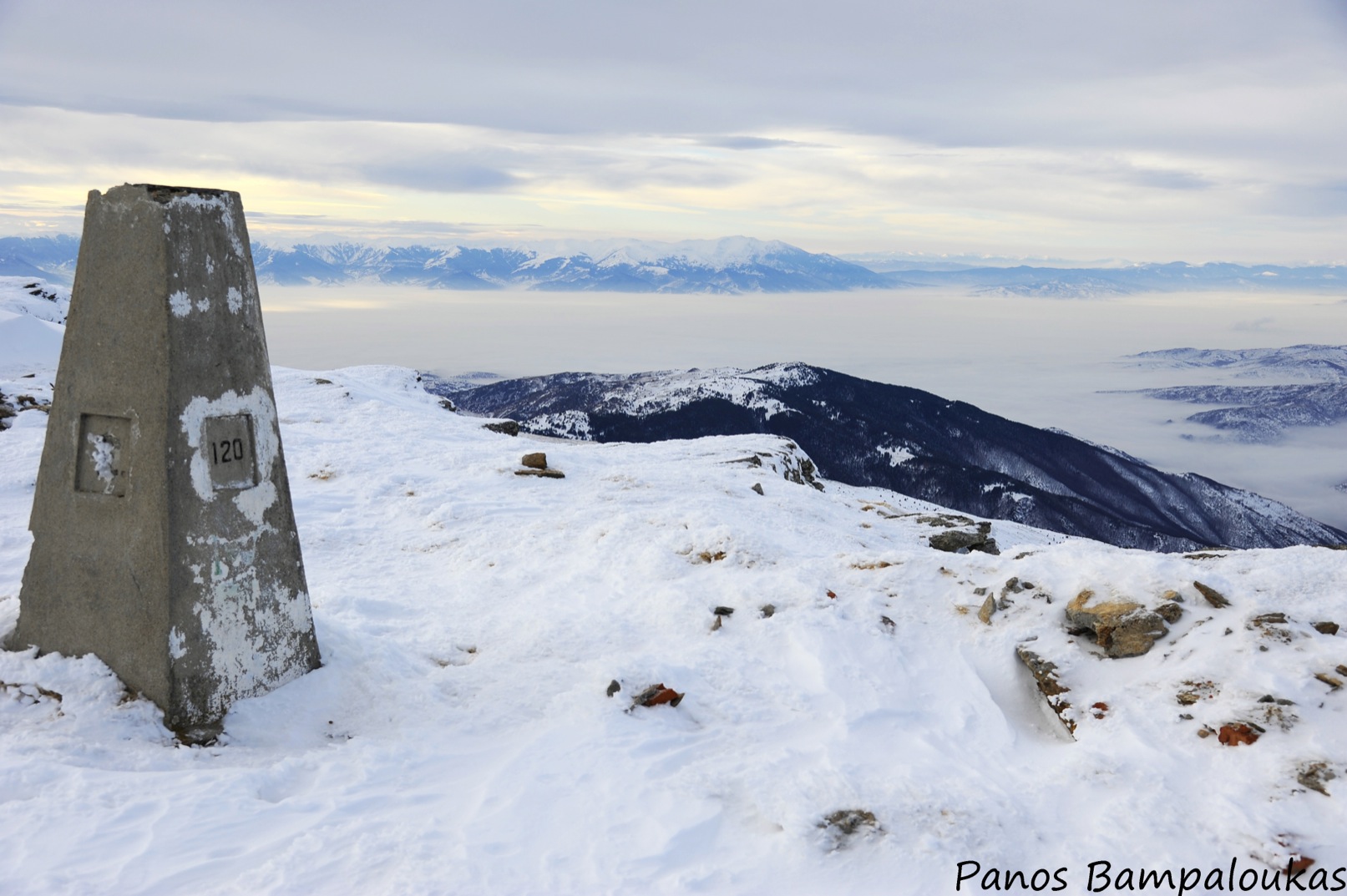 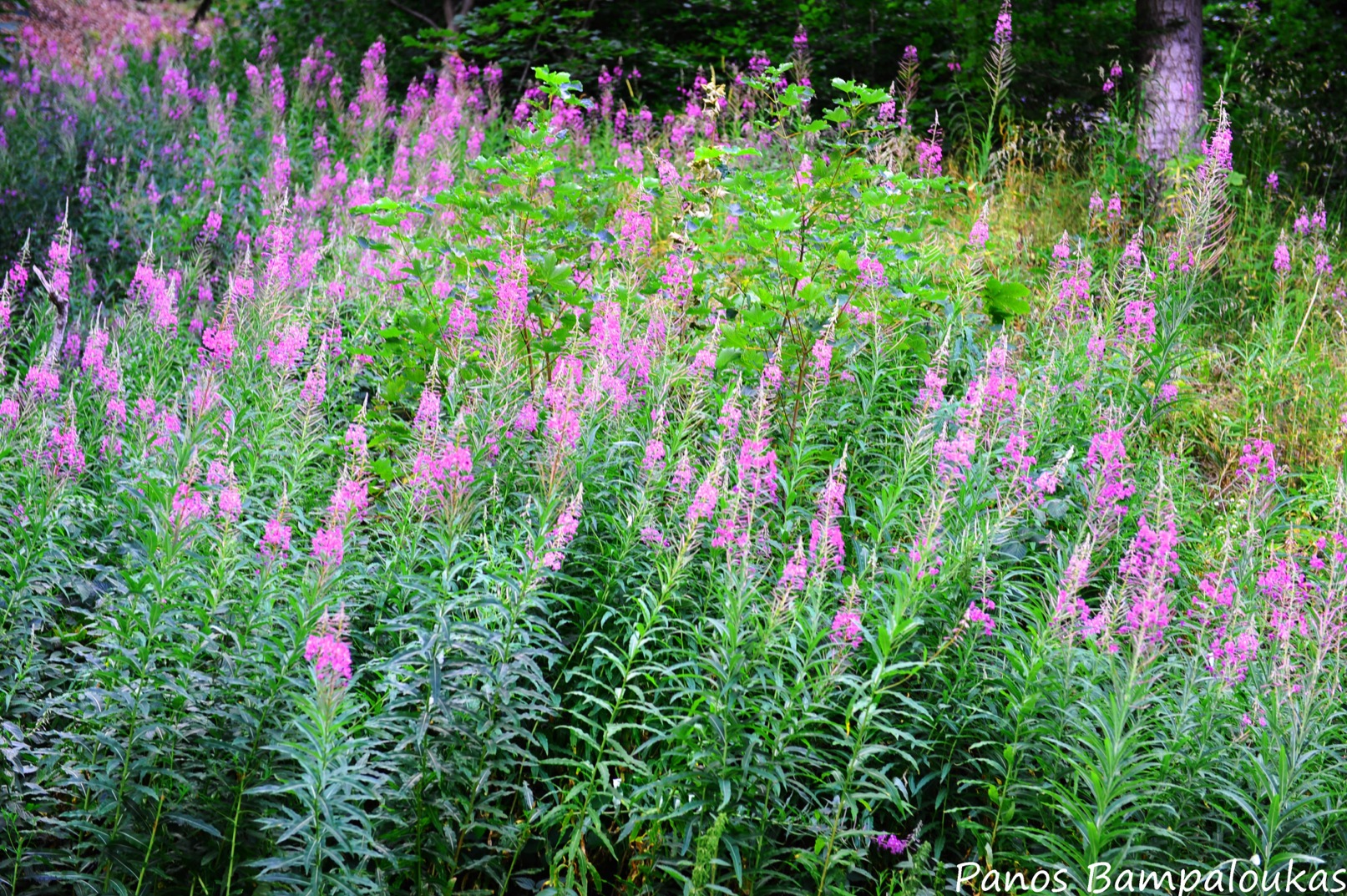 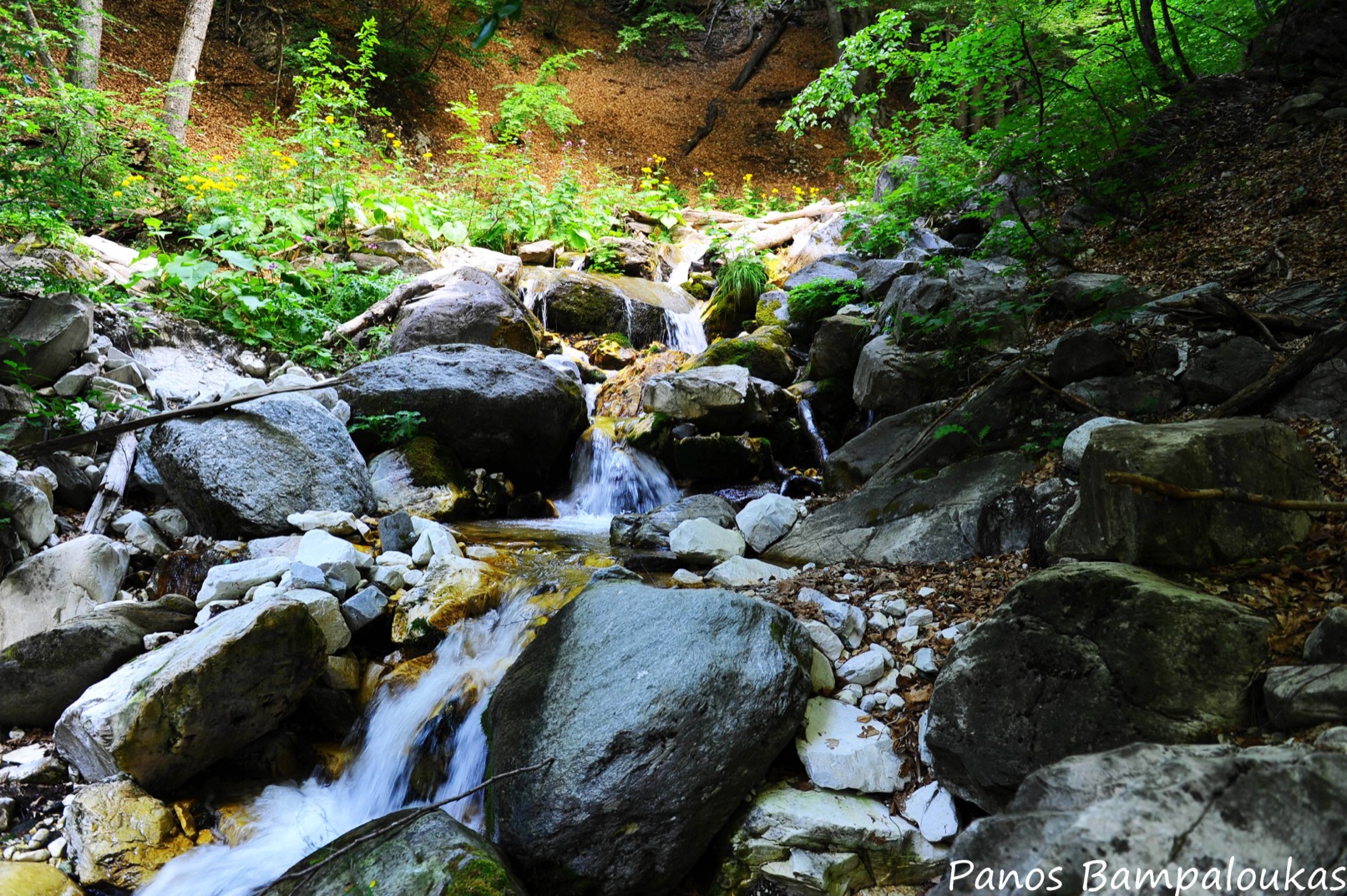 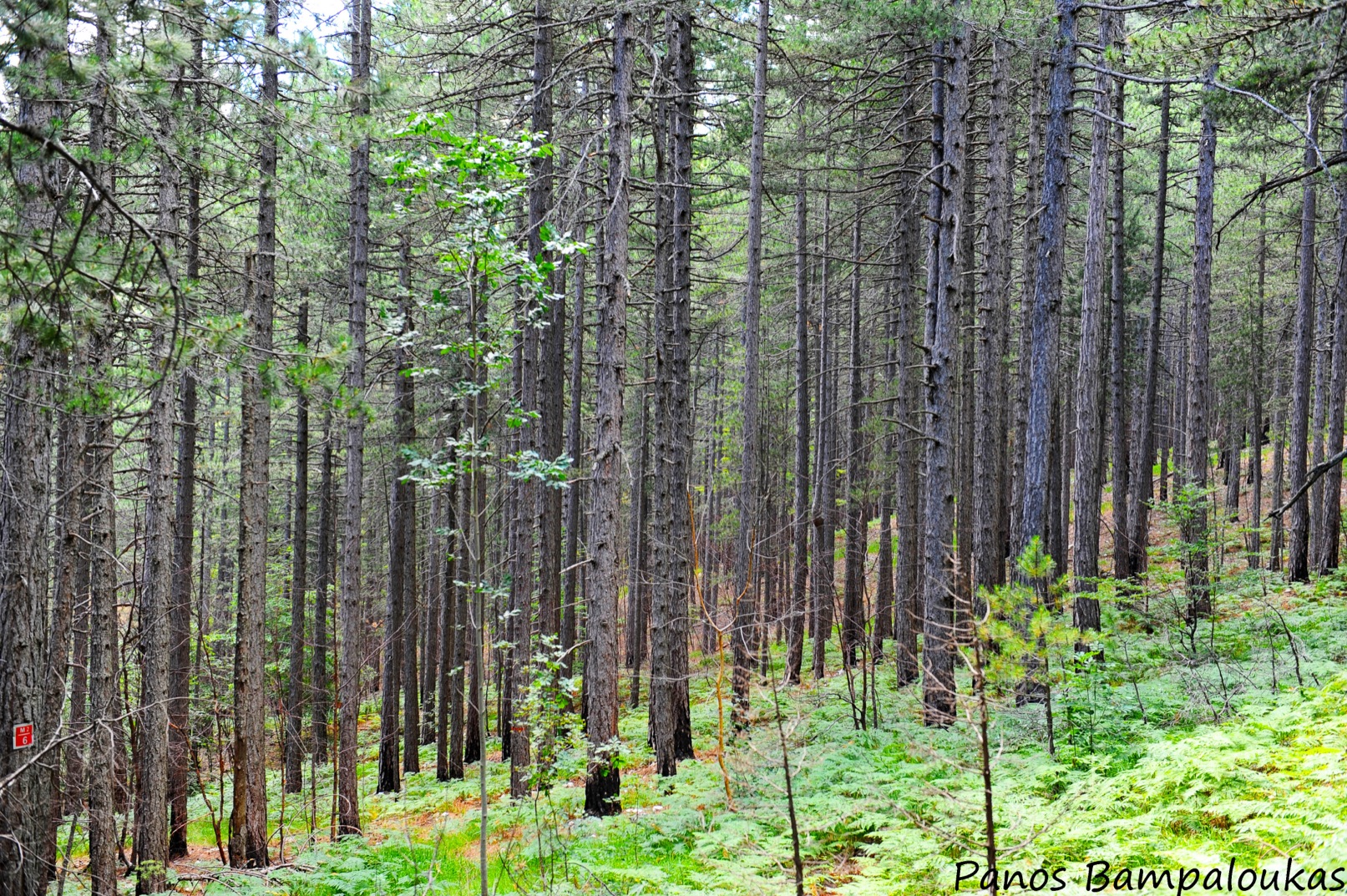 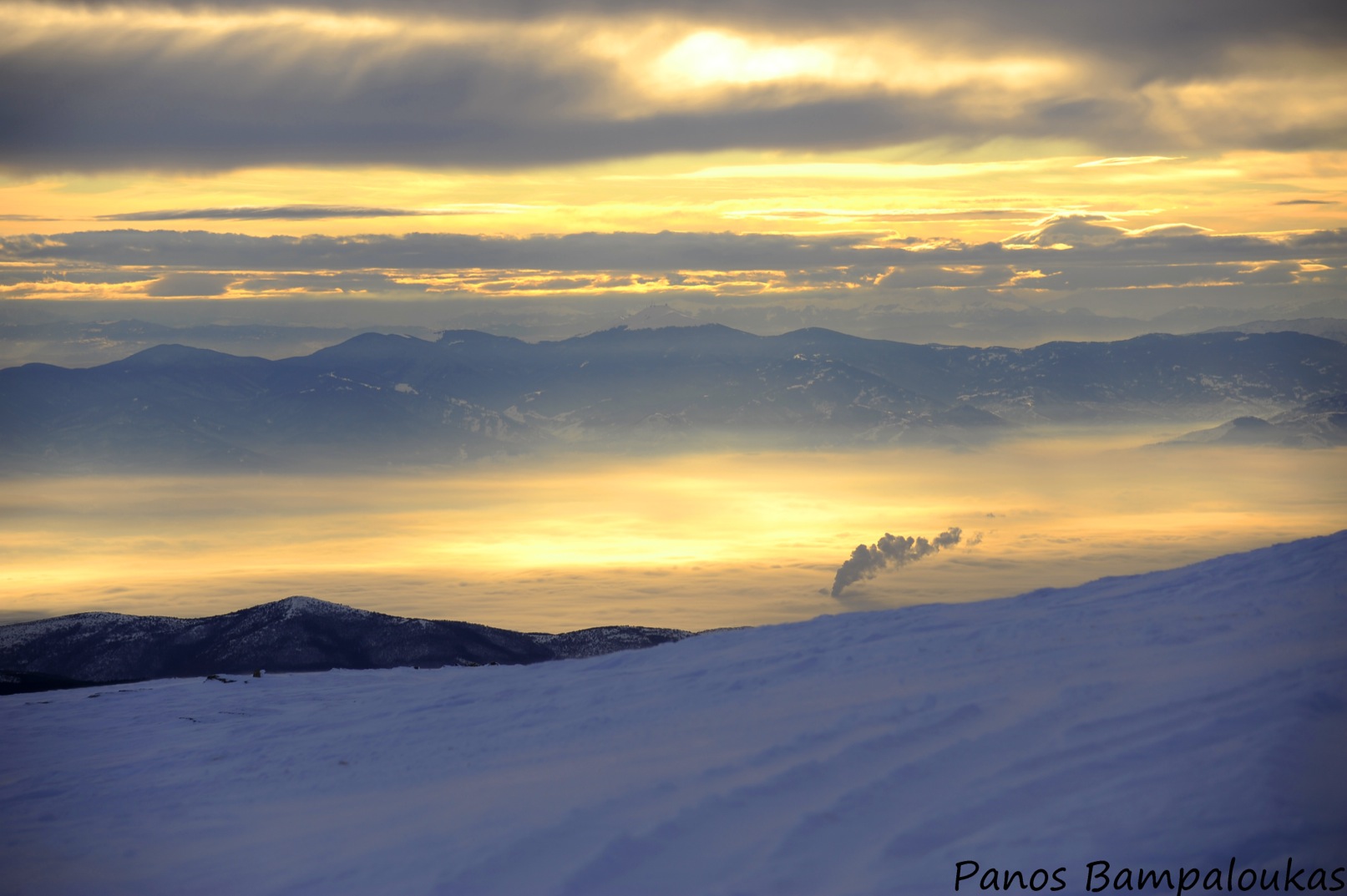 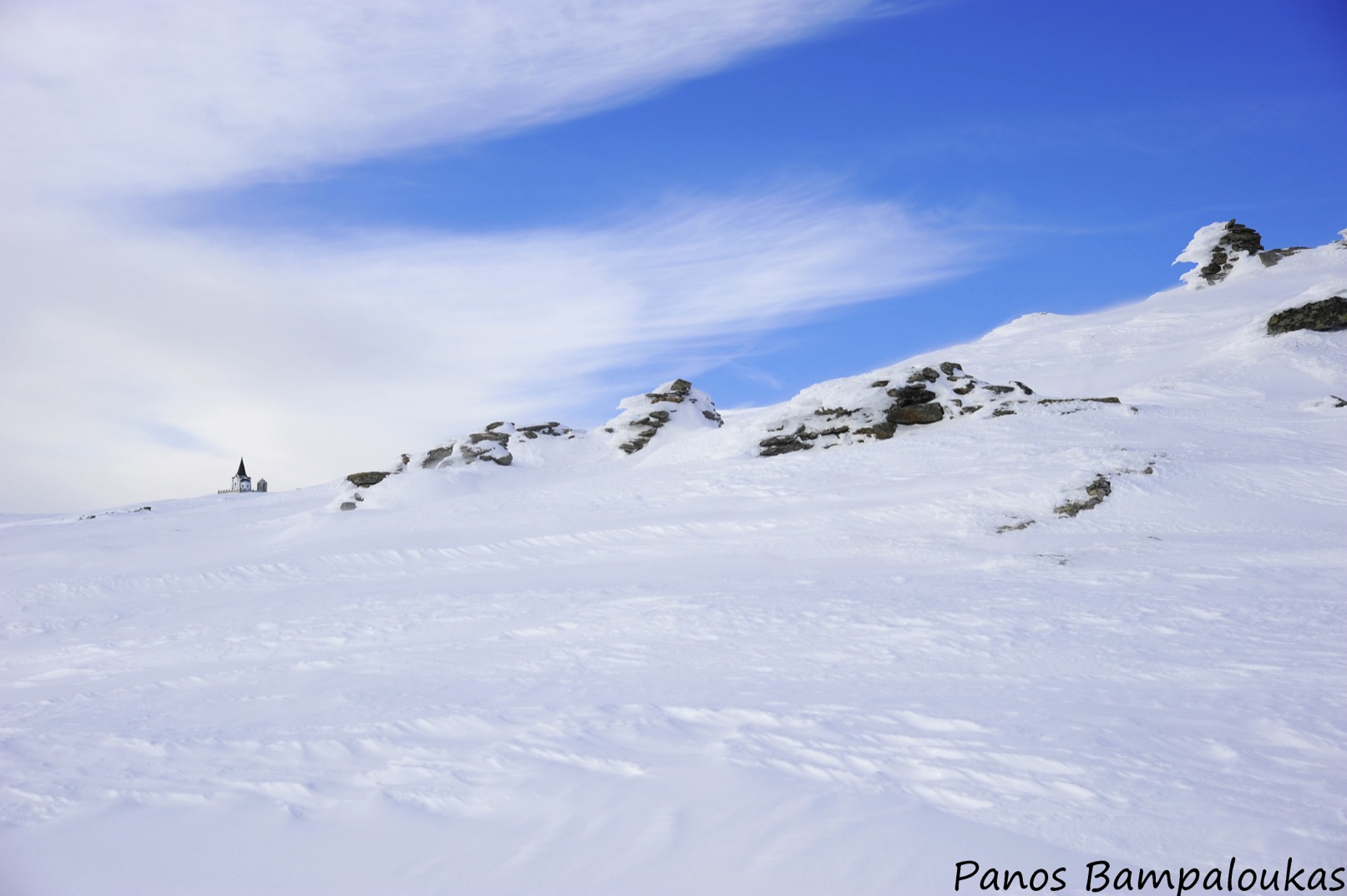 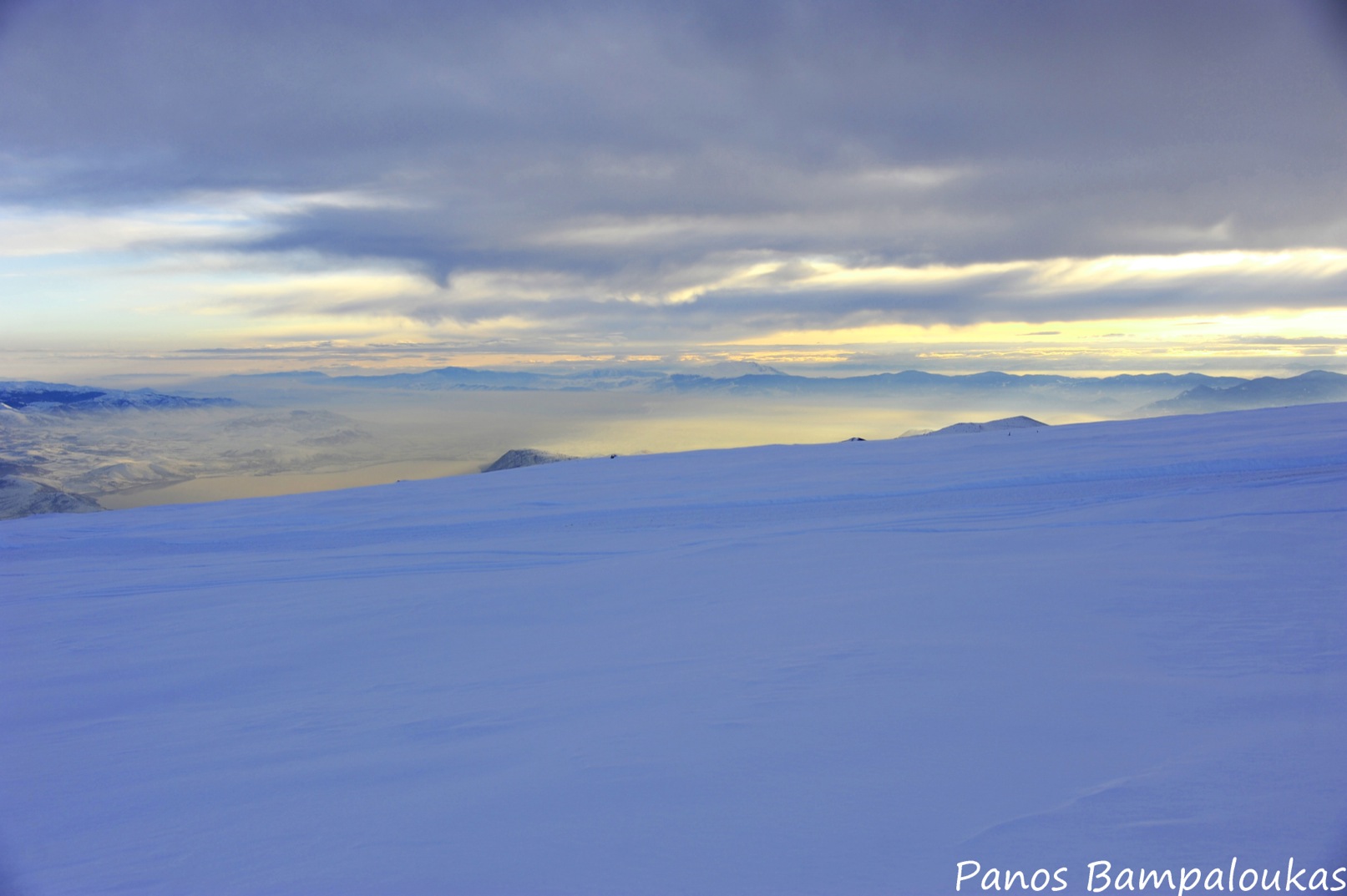 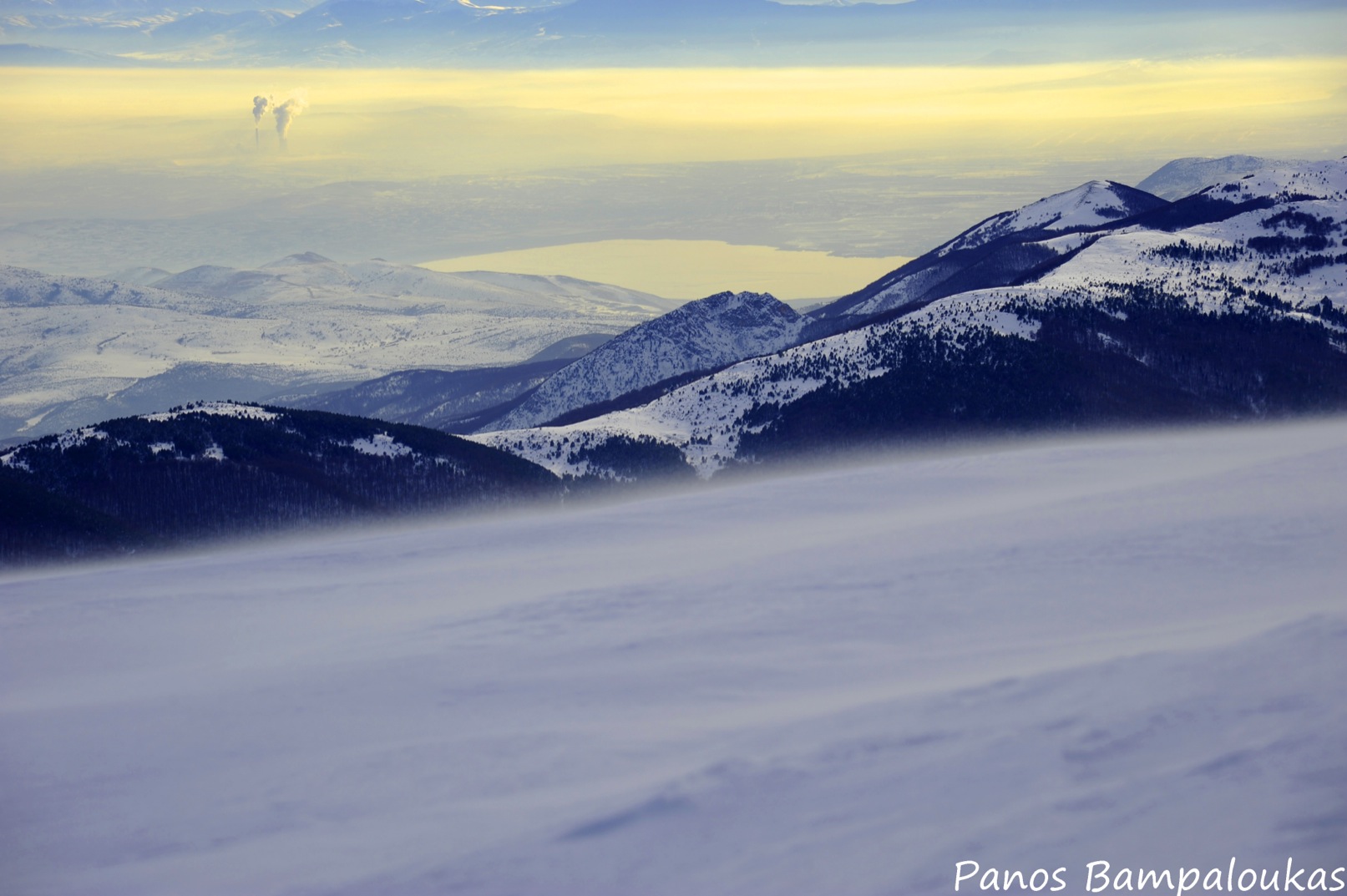 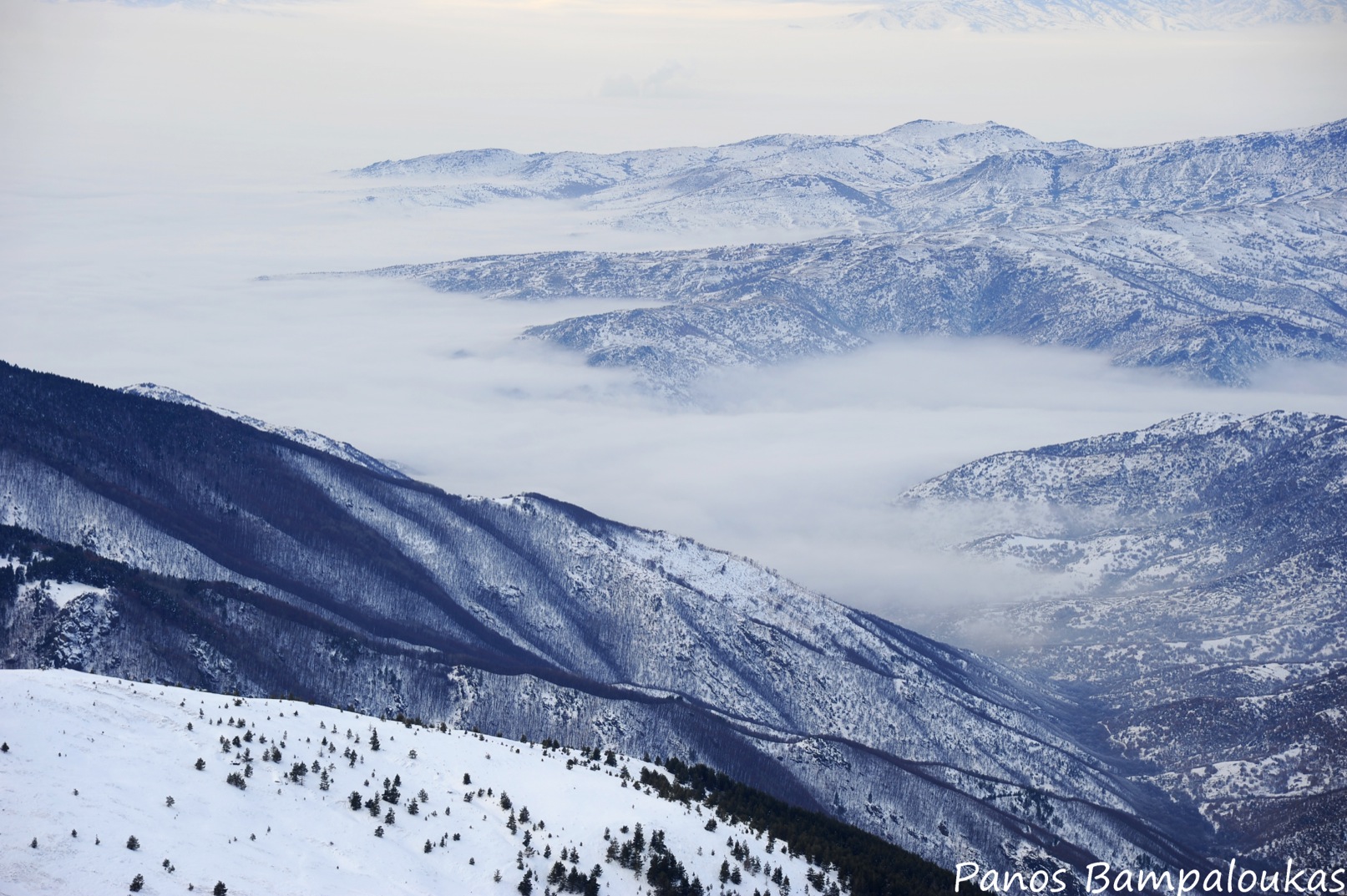 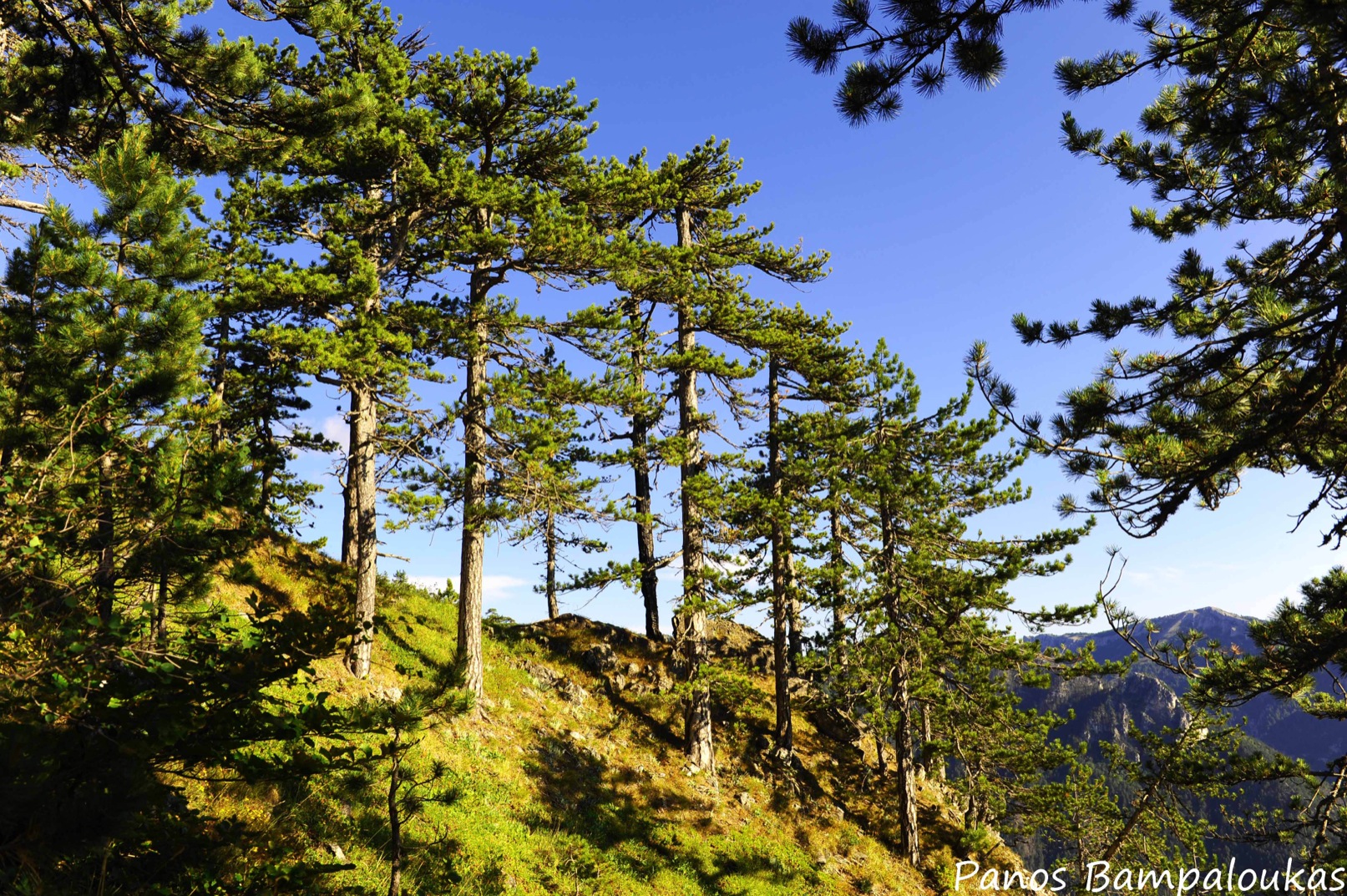 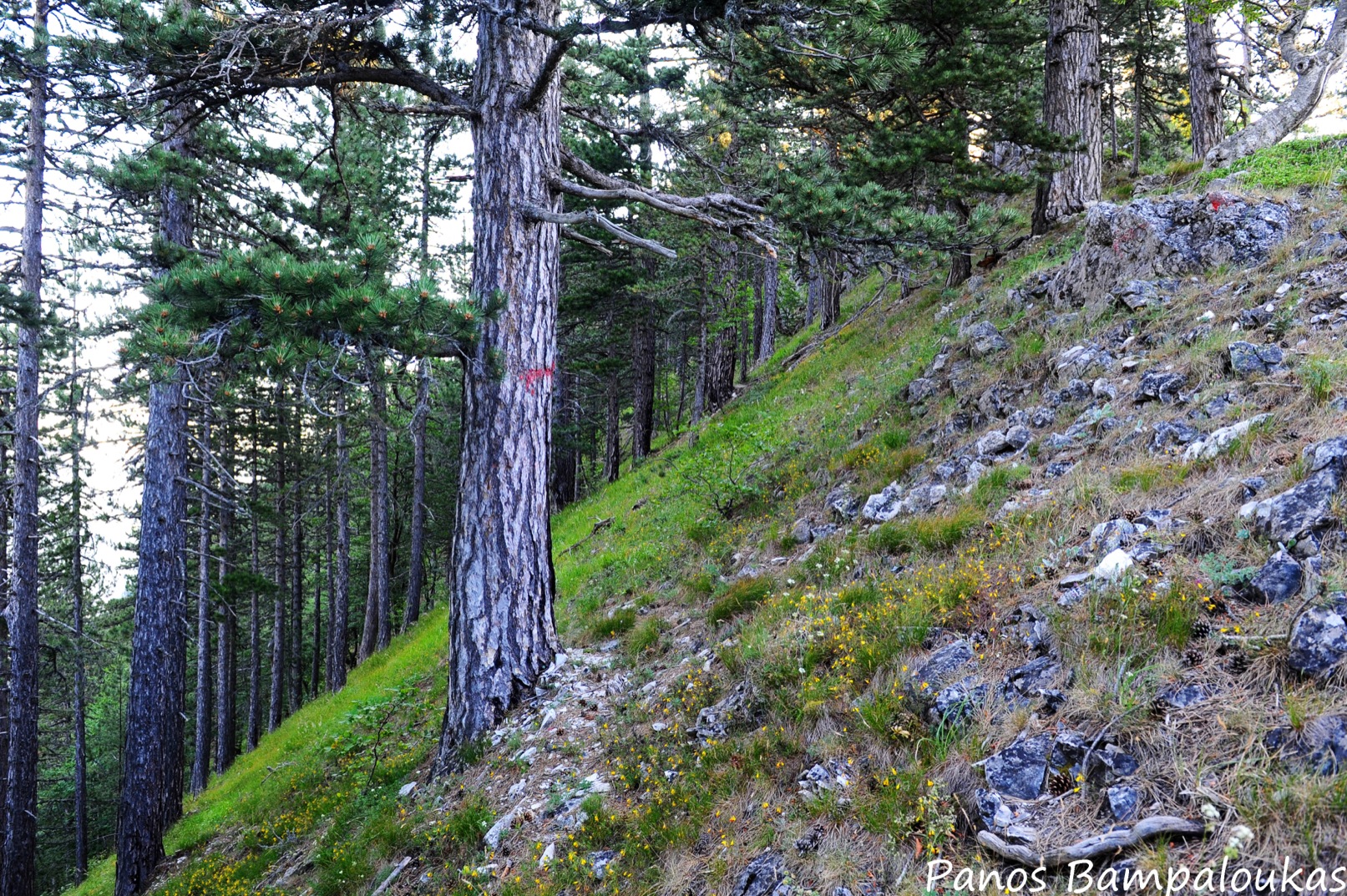 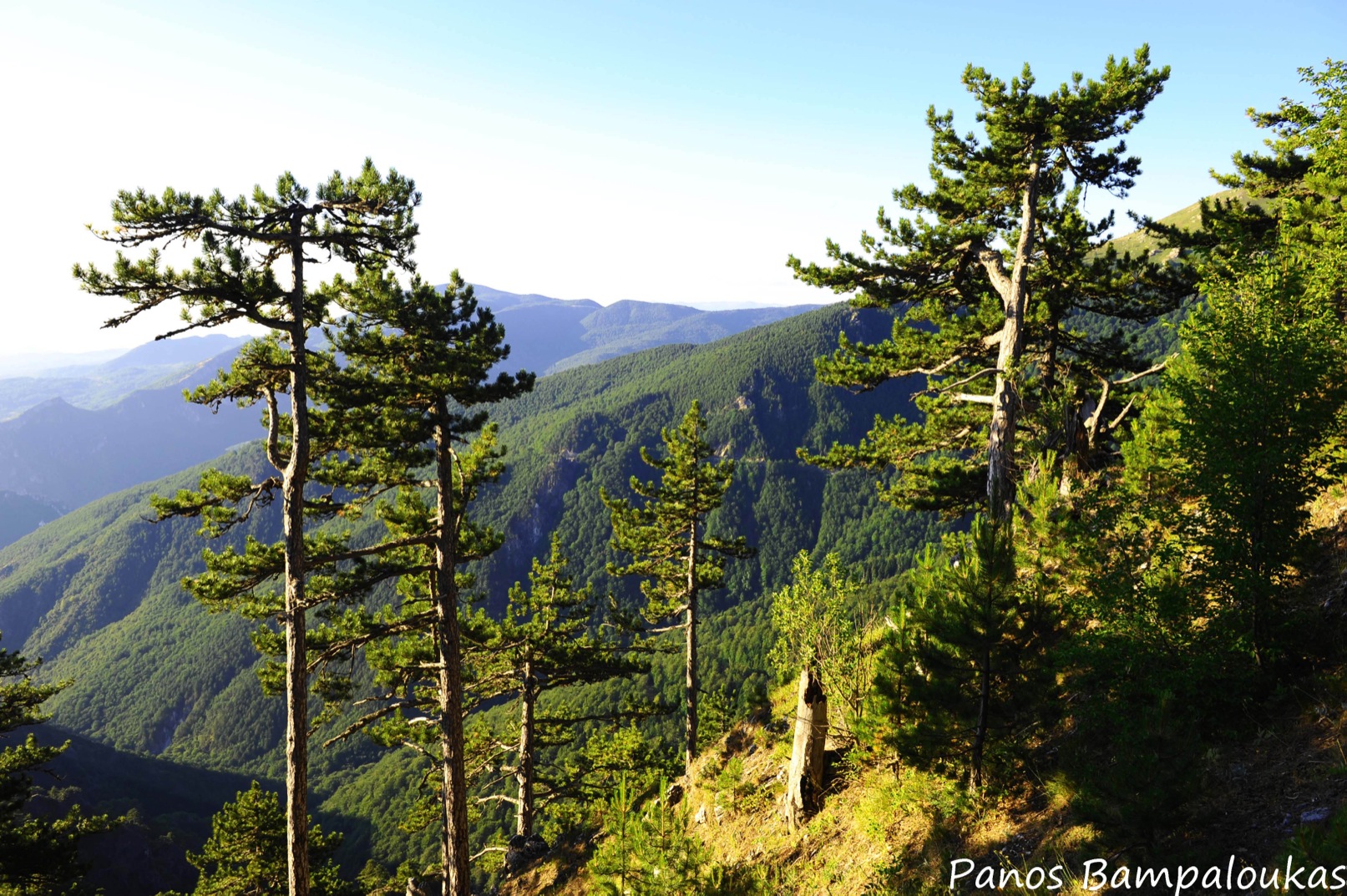 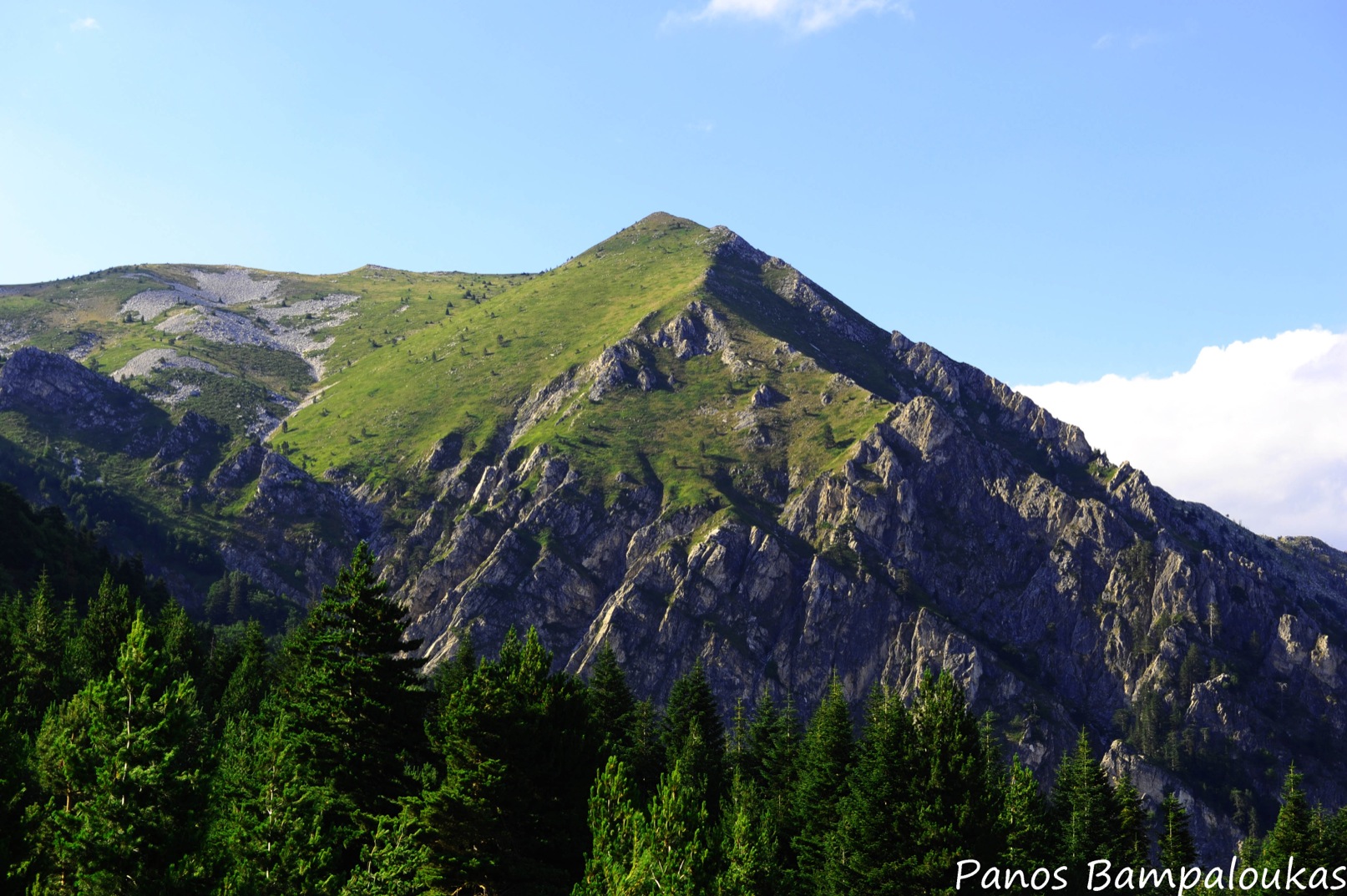 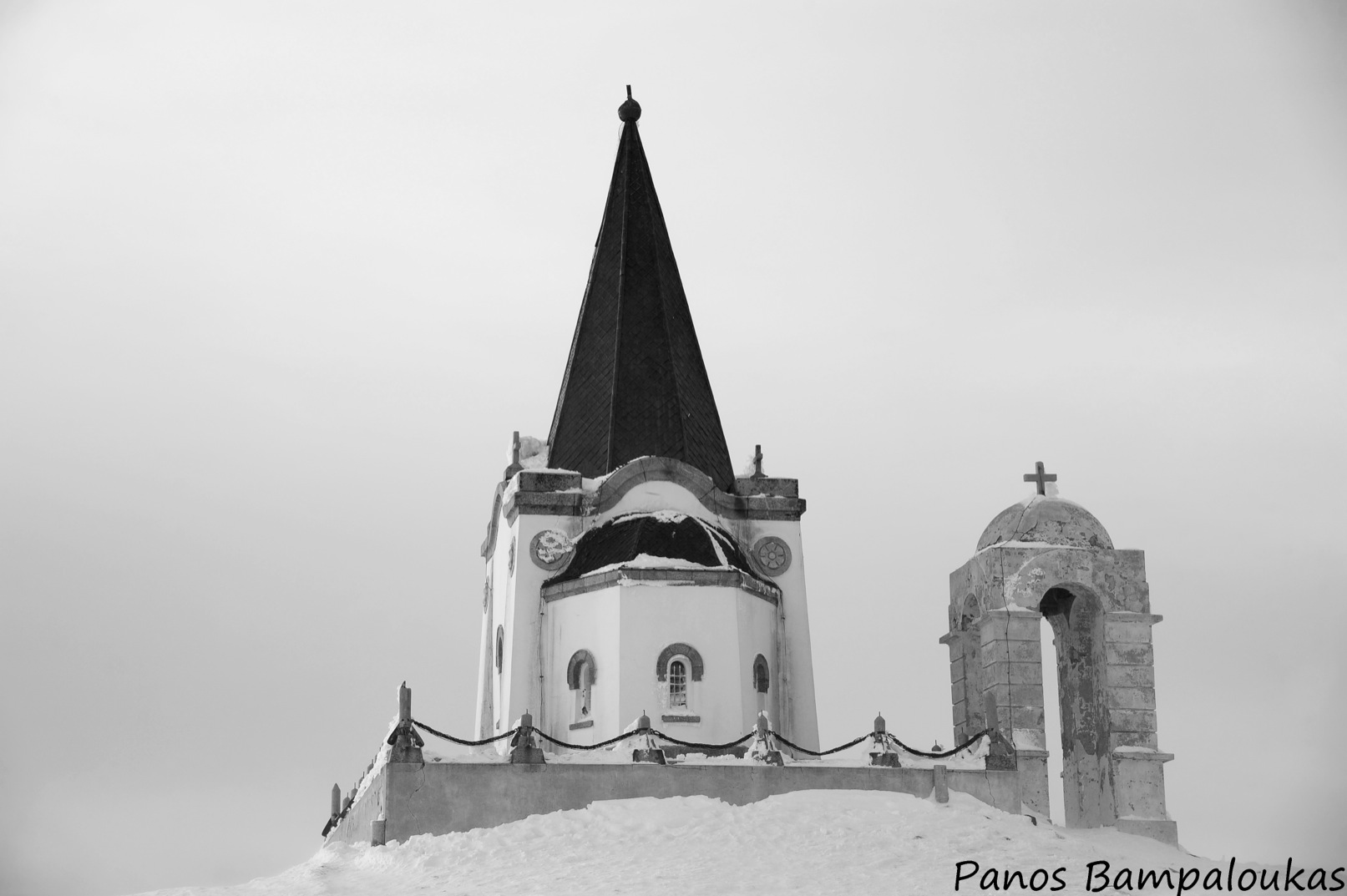 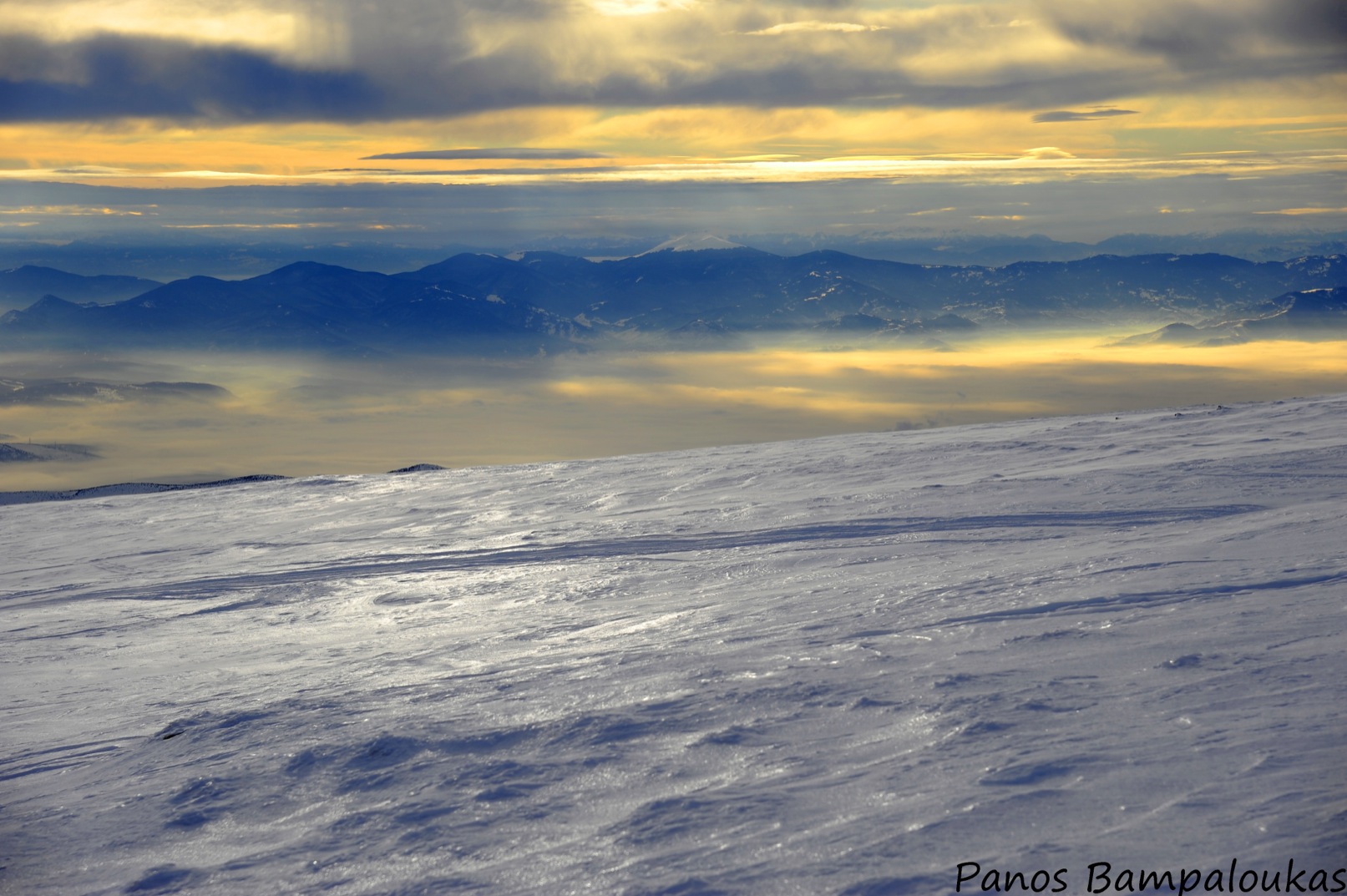 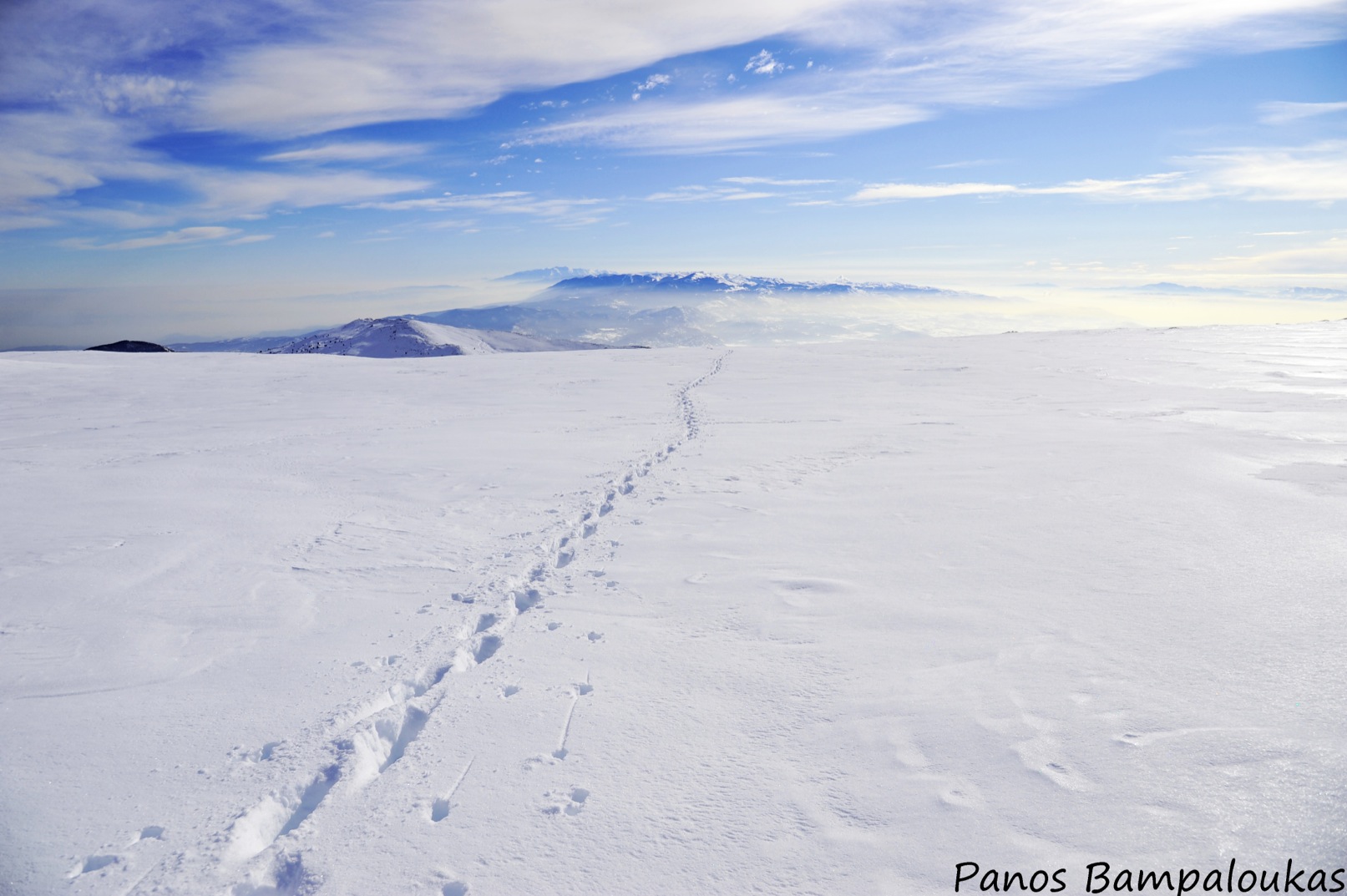 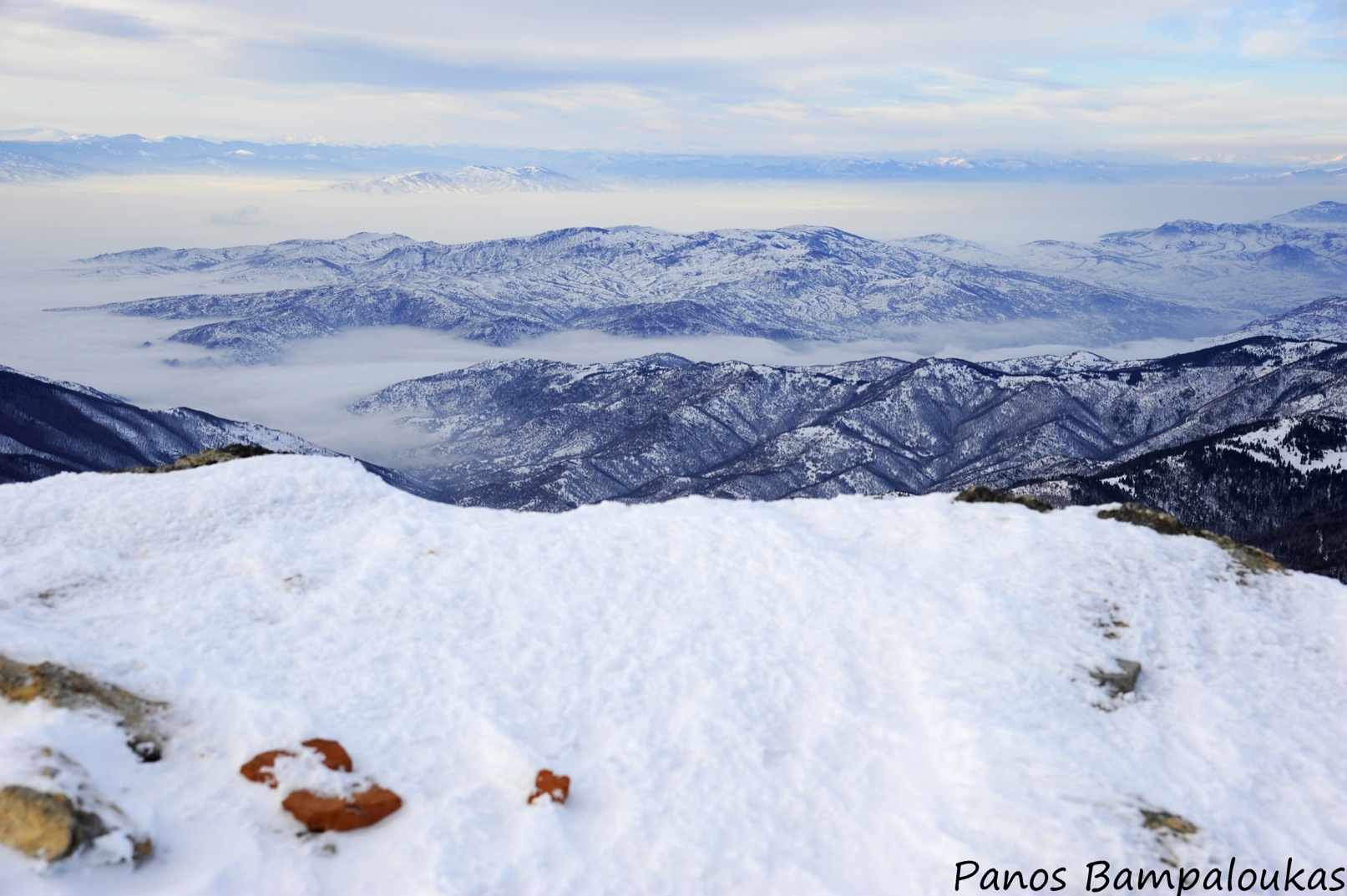